Layla Grace Marsh is almost 2 years old. Six months ago she was a happy, healthy 15-month-old girl living with her parents in Cypress, Tx. Now Layla is in a fight for her life, battling an extremely aggressive form of cancer.

At 16 months old, her sleeping habits and appetite changed, and she started to become more irritable. In May, when Layla woke up with a swollen eye and her parents took her to the doctor, they were told she had an ear infection. But her parents knew something else was wrong. They noticed her belly was hard and swollen, and she was not having bowel movements. Then Layla stopped eating. Still without a dirty diaper, the little girl became lethargic. The family was referred to a GI specialist and that’s when they got the news that no parents ever want to hear: Layla was suffering from Stage 4 Neuroblastoma.

Layla has a massive cancerous tumor extending from above her left kidney, around her side, over her belly and wrapping around her aorta. The cancer has also attacked Layla’s bone marrow and bones. Six surgeries, five rounds of chemo, eight days on a ventilator, multiple blood transfusions and many lengthy hospital stays later, Layla is still fighting. She still has to undergo extensive radiation, a bone marrow transplant and six more months of chemo. She will also receive six experimental immunotherapy injections. These six injections are crucial to her treatment, and raise her survival rate from 30% to 40%. Because they are in the experimental phase, they are not covered by insurance and are $18,000 each.

You can show your support by purchasing a Layla Grace t-shirt for only $10. 100% of all t-shirt sales will go towards Layla's medical bills. Please email your order to fightforlayla@gmail.com and send payment via PayPal http://tinyurl.com/kvee97 by October 1st. If you have any questions, please email fightforlayla@gmail.com. You can follow Layla's progress at www.laylagrace.org and http://twitter.com/LaylaGrace. Thank you for your support and prayers! 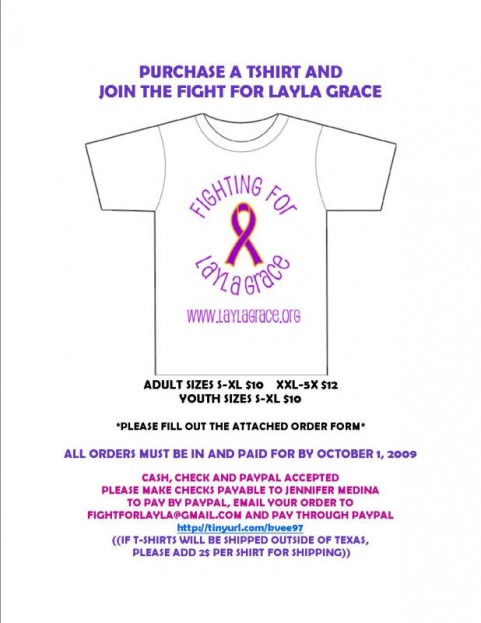